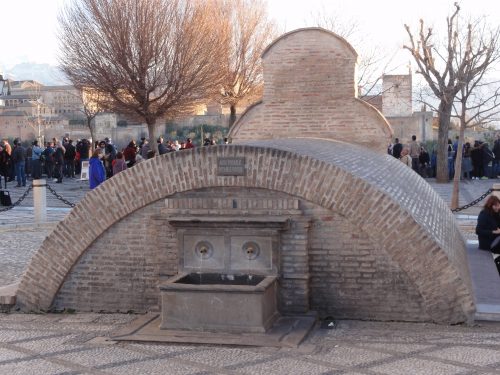 Viewpoint that crowns the Albaycín where the 1922 Deep Song Contest was to be held and whose views inspired several of Lorca’s writings.

The ensemble formed by the church of San Nicolas, the cistern and the small square with its imposing viewpoint define the relationship of beauty and harmony of the Albaycin district, the Alhambra, the Darro valley, the old city and the horizon of the Vega.

The church that gives its name to the surroundings consists of a single nave divided by arches of new construction since the original was destroyed by arson in 1932. The original layout was composed in 1535 by Rodrigo Hernández.

The cistern, on the other hand, is a Christian construction built over a previous Muslim one. The cistern is rectangular and is covered by a semicircular vault.

In front of the entrance to the church, which has suffered multiple abandonments in recent times to be recovered, opens the most famous viewpoint of the neighborhood declared a World Heritage Site by UNESCO.

The San Nicolás viewpoint was an element of inspiration for Federico. José Mora Guarnido blames Lorca’s lack of interest in studies on the excursions he undertook in the Albaicín and the long stops to contemplate the Alhambra.

The three heritage elements that define the place are linked to García Lorca, in particular to his student years, and to his early compositions. José Mora Guarnido blames Federico’s lack of interest in studies on the excursions he undertook through the Albaycín and the long stops in San Nicolás. “Our spirit was reluctant to leave (…) and we would escape to the Alhambra, on moonlit nights we would go to the Albaycín to contemplate it from the small square of San Nicolás and we would stay until dawn, which was more pleasant to read Rubén Darío or Lope”. From 1920, once Falla took up residence in a carmen of the Alhambra, hikers included the composer in their Albaicín escapades.

The visual relationship between the Albaicín and the Alhambra, necessary for mutual understanding, vertebrates one of the first prose by García Lorca prior to the publication of his first book. The Fantasía Simbólica, published in 1917 in the bulletin of the Centro Artístico, confronts both hills: “From the cubes of the Alhambra one sees the Albaycín with the courtyards, with ancient galleries through which nuns pass (…). It is something mysterious that attracts and fascinates the view of the Albaicin from the fortress and palace of midnight. And the panorama, being so splendid and strange and having those powerful voices of romanticism, is not what fascinates. What fascinates is the sound. It could be said that all things sound… That light sounds, that color sounds, that shapes sound (…). Every hour of the day has a different sound. They are symphonies of sweet sounds what you hear”.

Just look out over the viewpoint and contemplate the Alhambra, or glimpse the Albaycín from the Plaza de los Aljibes, to experience that multiple sensation described by Lorca.

In that same text, Lorca devotes a chapter entitled Nightmarish Camphor, to describe the neighborhood, primitive settlement of Granada.

Many years later, during his visit to Argentina, Lorca revived that vision of youthful Granada with a lecture entitled How a City Sings from November to November. It is a sensual tour of the city through popular songs. He pronounced it in Buenos Aires on October 26, 1933. “We are approaching with our ears and our sense of smell and the first sensation we have is a smell of sedge, mint, a vegetable world softly crushed by the feet of mules and horses and oxen that come and go in all directions through the vega. Then the rhythm of the water. But not a crazy water that goes where it wants. Water with rhythm and not with rumor, measured water, just, following a geometric and rhythmic channel in a work of irrigation. Water that waters and sings down here and water that suffers and moans full of tiny white violins there in the Generalife“.

The San Nicolás Square was the first stage chosen by Manuel de Falla, Lorca and Zuloaga to celebrate the Flamenco Song Contest of 1922, organized by the Centro Artístico. In fact, all the printed programs and posters mention this. However, just a week before the celebration, the organizers decided to change the location because of the difficulties of access and, above all, the small capacity and the large attendance that was expected. The alternative was logical and consecutive: the Plaza de los Aljibes in the Alhambra which is next to the viewpoint and which in the 1920s stretched almost to the edge of the citadel.

Manuel de Falla, as promoter and soul of the song contest, exchanged several postcards of the church and the cistern of San Nicolás in the previous months with his friend the painter Ignacio Zuloaga, which are preserved in the Manuel de Falla Archive, with the idea of graphically specifying the space chosen to hold the contest.

In 1932, Falla again sent different photos of the temple, but now with a very different motive: to show his disdain for the popular riots that ended with the burning of several churches, including that of San Nicolás. Falla, who showed his satisfaction for the peaceful way in which the proclamation of the Republic took place, reacted harshly when the incidents occurred. He sent a telegram of repulsion in May 1932 to the President of the Republic, Niceto Alcalá-Zamora: “Small groups have spent two days committing all kinds of sacrileges and violations of religious houses and insulting people in the city”.

A Fernando de los Ríos, friend and Minister of Public Instruction informed him: “The events have left an impression of helplessness, among other things”. And a few weeks later, also to Fernando de los Ríos: “Last night, in spite of the concerns finally adopted, the church of San Nicolás was still burning until its destruction, while someone shamelessly rang the bells”. 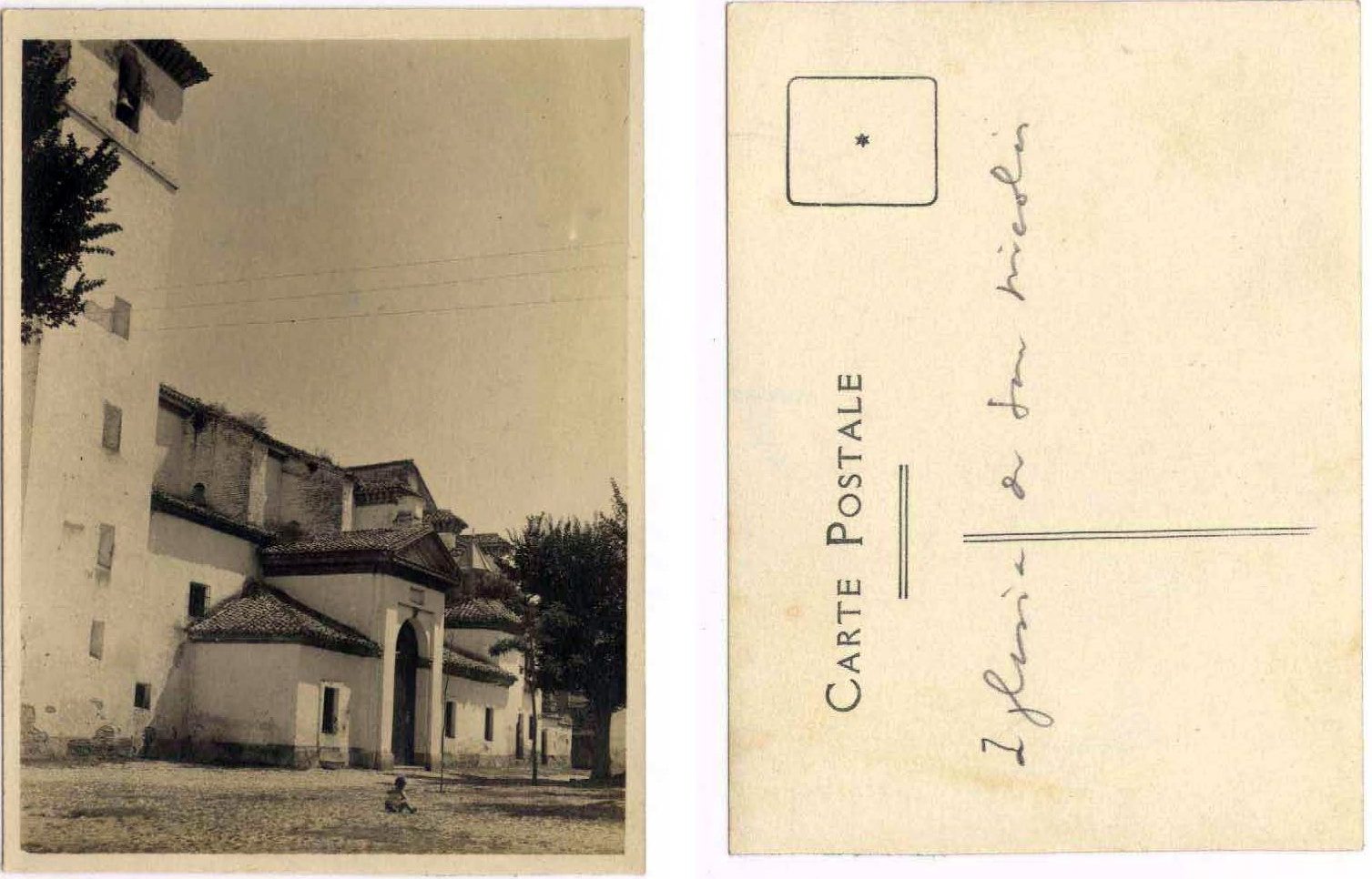 Why should sight and not smell or taste always be used to study a city? The alfajor biscuits, the torta alajú dessert and the mantecado de Laujar cake say as much about Granada as the tiling or the Moorish arch; and the marzipan of Toledo with its monstrous garb of plums and pearls of anise, invented by a cook of Charles V, expresses the Germanism of the emperor more sharply than his red chin. While a cathedral remains imbedded in its time, its profile crumbling, eternal without being able to take a step to the next day, a song suddenly jumps from its time to ours, alive and trembling like a frog, with its recent joy or melancholy, verifying identical prodigy like the seed that blooms when leaving Pharaoh’s tomb. So, let us hear the city of Granada.

Granada has two rivers, eighty bell towers, four thousand irrigation channels, fifty fountains, a thousand and one pumps and one hundred thousand inhabitants. It has a factory for making guitars and mandolins, a store where they sell pianos and accordions and harmonicas and above all drums. It has two promenades to sing, the Salón and the Alhambra, and one to cry, the Alameda de los Tristes, a true apex of all European romanticism, and it has a legion of pyrotechnicians who build noise towers with an art similar to the Patio de los Leones (Lions’ Patio), which must irritate the square water of the ponds.

(How a City Sings from November to November)