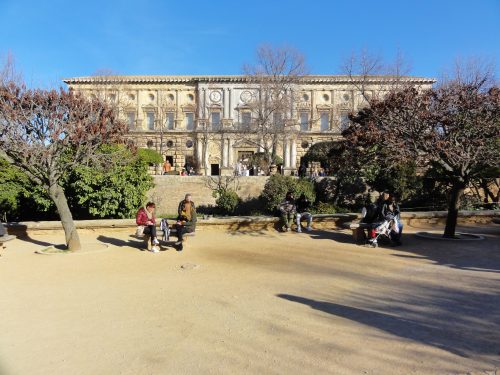 Esplanade built after the conquest of Granada where the Deep Song Contest was held in 1922 under the auspices of Lorca, Falla and other intellectuals.

Plaza de los Aljibes in the Alhambra and its portentous viewpoint, scene of the 1922 Flamenco Song Contest, was a space built after the Christian annexation in 1492. Its name comes from the huge tanks that filled the gap between La Alcazaba and the Nasrid Palaces and served to ensure the water supply in the years after the conquest of the Catholic Monarchs.

They were built by Íñigo de Mendoza, Count of Tendillas, first warden of the Alhambra and captain general of the Kingdom of Granada. The cistern is 34 meters long, 6 meters wide and 8 meters high and, once covered, it became a large esplanade between the towers and defenses of the city, on the one hand, and the Wine Gate and the entrances to the Arab palaces and that of Carlos V, whose construction began in 1527.

Falla, who abandoned musical composition to focus on the contest, was convinced that singing was “the initial germ of a very important part of our lyric poetry”.

His link with García Lorca and the whole group of spirited intellectuals who turned Granada in the 1920s into a place of cultural irradiation is linked to the Flamenco Song Contest of 1922, the first national contest dedicated to flamenco organized by the Granada Centro Artístico.

The contest, held on June 13 and 14, 1922, supervised, among others, by Manuel de Falla, Federico García Lorca, Miguel Cerón, Antonio Chacón, and Hermenegildo Lanz, with the advice of singers such as Manuel Torre, meant the recognition by the creators and intellectuals of this genuine expression of the so-called “primitive Andalusian singing”. The contest began to take shape a year earlier in the gathering of El Rinconcillo, in the Alameda café, where Lorca and his friends were regulars.

The contest, which opened a deep controversy between those who considered it a “Spanish thing” without interest (the chronicler Francisco de Paula Valladar) and those who defended the need to recover the original song and rid it of spurious additions (the musicians Falla, Joaquín Turina, Federico Mompou, Roberto Gerhard, Felipe Pedrell and the critic Adolfo Salazar; the painters Ignacio Zuloaga and Santiago Rusiñol, and the writers Antonio and Manuel Machado, Enrique Díez-Canedo, Edgar Neville, García Lorca or Ramón Pérez de Ayala) marked a before and after in the history of deep song. Falla, who abandoned musical composition to focus on the call, was convinced that singing was “the initial germ of a very important part of our lyric”.

The contest was scheduled to be held in San Nicolás Square, in the Albaicín, on the other side of the Darro valley. In fact, part of the signage was printed with the initial location. The move to the Plaza de los Aljibes, because of the difficult access and the large number of people expected, was decided on June 8. Ramón Gómez de la Serna, music director Kurt Schindler and musicologist John B. Trend and others attended.

The results of the contest were as follows: the honorary prize was declared void; the Zuloaga prize of one thousand pesetas went to Diego Bermúdez, El Tenazas (The Tongs); a second prize of one thousand pesetas was awarded to Manolo Caracol. Also awarded prizes were Carmen Salinas, Frasquito Yerbabuena and José Soler (500 pesetas each). Other smaller prizes rewarded the art of La Gazpacha, Conchita Sierra and La Goyita. The guitar prizes two hundred and fifty pesetas each were awarded to José Cuéllar and Niño de Huelva.

The Flamenco Song Contest consecrated the Plaza de los Aljibes as a social meeting place in Granada. For the 1922 contest, it was even suggested that spectators wear costumes from the years 1830-1840. It was suggested that women should wear “tight-fitting jackets, skirts and sleeves with ruffles, their hair with a parting in the middle, and a mantilla pinned on”, and men with Andalusian hats; formal dress and top hats were expressly forbidden. Different advice was also given, calling for “strict punctuality”, absolute silence, avoiding “conversations, comments and even applause until the couplets had been sung”, refraining from “intervening to ensure the impartiality of the judgment”, and “complete silence in the ambigu”.

The Singing Contest was not the only musical activity recorded this year in Granada in which the city became something like the Spanish capital of music. 1922 was the year of the founding of the Victoria Eugenia Royal Conservatory of Music, in whose building on Calle San Jerónimo street Federico and Francisco García Lorca had attended high school, and in the days surrounding the competition concerts were held by the Madrid Orchestra conducted by Fernández Arbós. Antonia Mercé, La Argentina, danced at the Olimpia Coliseum, the Isabel la Católica theater and the Carlos V Palace. Throughout the year the concerts of the Granada Philharmonic Society were held with brief participations by Falla outside the program.

On June 27, 1927, Falla composed the incidental music for the performance of Calderón’s auto sacramental The Great Theater of the World, organized by the Ateneo de Granada and the Ladies of Honor and Merit Board, which was staged in the Plaza de los Aljibes in the Alhambra (although the original program indicates the 18th, technical problems prevented the performance). It also involved Antonio Gallego Burín (artistic director), Hermenegildo Lanz (set designer) and Ángel Barrios (orchestra conductor).

(Poem about Gypsy Sigiriya. The Guitar.)

Public space located in the grounds of the Alhambra but open uninterruptedly and with free access.