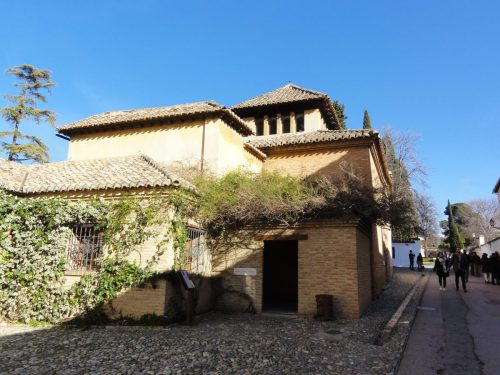 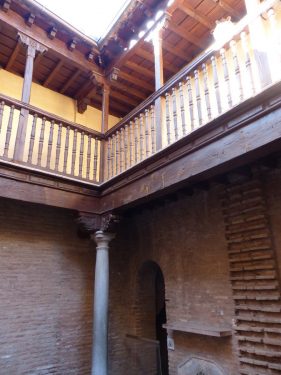 The El Polinario tavern was a meeting place for Federico and friends like Manuel de Falla. In its place now is the Angel Barrios museum. It preserves original vestiges.

The tavern and store of Antonio Barrios, El Polinario, on Calle Real in the Alhambra, was a place, no longer existing, for meetings and flamenco evenings attended by Lorca, Falla and some of the friends of the El Rinconcillo gathering. The link between the young men and El Polinario was his son, the international composer and concert pianist Ángel Barrios, who befriended Falla in Paris in 1907, at Isaac Albéniz’s house, and who combined his tours abroad as a guitarist with the Trío Iberia (formerly called Trío Granada) with his stays at his father’s house-bar.

The tavern was built on the site of a 14th century Arab bathhouse that was demolished in 1534. The establishment of El Polinario was expropriated by the State in 1934 and then demolished, although a small courtyard and the pillar of a fountain remain. In its place is the museum dedicated to Angel Barrios, where an important legacy of paintings, drawings, scores and correspondence is kept, given to the Alhambra Board by his daughter after his death in 1964.

Among the works are a watercolor by John S. Sargent and the parchment, signed by Ravel, Richard Strauss and Benavente, among others, for which Santiago Rusiñol named El Polinario “consul of art in the Alhambra”. In 1918, in his garden, adjacent to the Alhambra, García Lorca photographed the four scenes of The History of the Treasure , a very short story with his own verbal script in which Lorca himself, Ángel Barrios, Manuel Ángeles Ortiz and Miguel Pizarro took part as actors.

The entrance, through a gate, gave way to a hallway that connected with a small patio. To the left was the tavern with a walnut counter and, opposite, a window overlooking the street through which products were dispatched outside. It was the only establishment in the Alhambra neighborhood that sold practically everything: haberdashery, tobacco and groceries including hams from the Alpujarra.

The back room was the meeting place. Illustrious visitors were taken there and entertained with wine and food until his son picked up the guitar and El Polinario broke into song. Antonio Barrios was also a painter and used the boards of the cigar boxes to make his sketches. He even exhibited in group shows. The studio was located on the second floor, in a room with a lot of character that, according to Antonina Rodrigo, had paintings dedicated to him by Zuloaga, Bacarisas, López Mezquita and Sargent.

Real de la Alhambra street is linked to Falla’s first stays in Granada before settling in the house on Antequeruela Alta street , where he lived until his exile. Falla first visited Granada in 1915 accompanied by Gregorio Martínez Sierra and his wife María Lejárraga. A year later, impressed by the surroundings of the Arab palaces, he premiered his Nights in the Gardens of Spain at the Carlos V Palace, accompanied by the Madrid Symphony Orchestra.

In September 1919, he returned with his sister and the painter Vázquez Díaz and his family and stayed at the Alhambra Boarding House located next to the atrium of the convent of San Francisco, now the Parador. After already deciding to live in Granada, the composer moved to the neighboring Carmona Boarding House and then to a house located next to the parador that no longer exists.

The first meeting between Falla and El Polinario has been described by an exceptional witness, Mora Guarnido. One summer night, with the light off, there was a knock at the door. They were several strangers who had heard the strumming of the guitar and did not resist their curiosity: they were Vázquez Díaz and his wife; the painter Gustavo Bacarisas; the Spanish-Argentine painter Alejandro Mackinlay and his wife, an emigrant Tsarist and a couple whose surname reverberated in everyone’s memory: Manuel and María del Carmen Falla. “That physically insignificant man, dressed in a cheap dark suit (…) was the author of Nights in the Gardens of Spain, the Brief Life…”.

According to Mora Guarnido, El Polinario had three great virtues as a tavern keeper: he never put water in the wine, he knew how to distinguish art and he was a great flamenco singer.

The evenings at El Polinario were described by musicologist John B. Trend, a witness of those encounters. The correspondent of The Times recalls the patio and the pillar whose pipe “had been choked with a towel” to stop the dripping. Then Ángel Barrios, with his guitar, and his father would appear and sing flamenco songs. “Falla sat there with half-closed eyes, with the guitar in constant accompaniment. From time to time he would raise his voice and sing (…). Mr. Falla wrote down those that pleased him or those that were impossible to transcribe (…). Mr. Falla made it possible for me to enrich my imaginative perception of Granada, introducing me to the music and its guitars…”.

In the area around the Calle Real and the Puerta del Vino (Wine Gate) at the beginning of the 20th century there were many photographers’ stores where tourists would go to have their portraits taken disguised as Arabs or sultans with a false plaster Arabian background. The result of that custom, and of Lorca’s own inclination to disguise himself in oriental costumes, is The History of the Treasure, a series of four photographs which reproduces the story of a prince who kept jewels and coins and which is staged in the garden of El Polinario. In the last one Lorca appears playing dead. The idea came while Ángel Barrios was posing for Manuel Ángeles Ortiz. According to Antonina Rodrigo’s reconstruction, someone arrived with a camera, Lorca rushed to portray the artist and his model and then set his Arab film in motion.

In the first image, Manuel Ángeles, Miguel Pizarro and Ángel Barrios, who poses on his knees, try to convince Lorca, in his role as prince, to show them the location of the treasure. In the second, Lorca is standing by the door of the treasure, indifferent to the bribe of Barrios, who offers him jewels, and the plea of his companions. In the third sequence, the avid prospectors decide to kill Lorca: Pizarro holds his arm and foot, Barrios stabs him with a dagger and Manuel Ángeles threatens him with a saber. In the fourth photo, the most dramatic, Lorca lies dead with his hands intertwined with the dagger. Manuel Ángeles holds a Koran and recites the verses pointed out to him by Manuel Ángeles, while Pizarro contemplates the scene with a deep sense of reverie.

Lights also in the house, which they call Polinario’s house.
When we get there the gate is closed.
I will knock heavily, until the master appears:
“Polinario they tell you and this is a very strange name.
We come for the reason of the north of Polinario”.
Thus Polinario spoke, calmly.
“I would not call me so, my name is Antonio Barrios.
Polinario was the name of my grandfather who has been dead for years.
The name passed to my father and to me it has also passed”.

The Angel Barrios Museum, which occupies the building where El Polinario was, is managed by the Alhambra Generalife Board. It is temporarily closed and cannot be visited.