Spanish writer of the Generation of 1898, whom Federico García Lorca read and admired and with whom he met up with on occasion despite the age difference.

He was born in San Sebastian in 1872. He mostly wrote novels, although he also wrote plays. He was the brother of the writers Carmen Baroja and Ricardo Baroja and uncle of the anthropologist Julio Caro Baroja and the film director and screenwriter Pío Caro Baroja.

He belonged to a well-to-do family. His father’s family was in the printing and journalism business. His mother came from Italy; his father was a mining engineer.

From Lorca’s writings it is clear that Baroja was an author he had read and admired, even if he did not share his mood. Both met up more than once in the literary circles of Madrid. The novelist only made one trip to Granada, on December 12, 1924, with Domingo Barnés and Ortega y Gasset.

At the age of seven his family moved first to Madrid and later to Pamplona. In this city his grandfather opened an inn in the building where they lived, which allowed him to see and observe all kinds of characters. In 1886, they returned to Madrid. After finishing high school, Baroja decided to study medicine. It was a period in which he began to frequent the cafés and to meet writers and artists. During his internship in hospitals he discovered that the profession did not satisfy him and he began to write short stories. He began The Road to Perfection and The Adventures of Sylvester Paradox.

His experience at the university and with the professors is not very good, as he describes in his autobiographical novel The Tree of Science. His father is transferred to Valencia and his brother Darío falls ill. Pío continues his studies in Valencia and manages to graduate, although he moves to Madrid to do his thesis, which he presents in 1896 with the title Pain, a Psychophysical Study. He begins to write articles for newspapers. He goes to Cestona (Guipuzcoa) to take up a vacancy as a rural doctor, which he soon abandons, as he does the position he obtains in Zarauz.

He returned to Madrid to take over the bakery run by his brother, which they had inherited from their aunt Juana Nessi. There he met José Martínez Ruiz, Azorín, and Ramiro de Maeztu, with whom he formed the “Group of Three”. In 1899, he began to travel around Europe. In Paris he meets the Machado brothers. Back in Madrid, he met the Swiss Hispanist Paul Schmitz, who was a translator of Nietzsche, and came into contact with the philosophy of this author.

In 1900, he published his first book, Sombre Lives, a collection of short stories. Also in this year he published The House of Aizgorri. Although in his youth he considered himself an anarchist and republican, his ideology evolves towards conservatism.

Some of his numerous novels, many of them grouped in trilogies, include Zalacaín the Adventurer (1908), The Search (1904), The Tree of Science (1911) or Memories of a Man of Action, a series of historical novels for which he was inspired by the life of an ancestor of his. He also published autobiographical texts, essays, biographies and plays. In 1935, he was admitted to the Spanish Royal Academy. 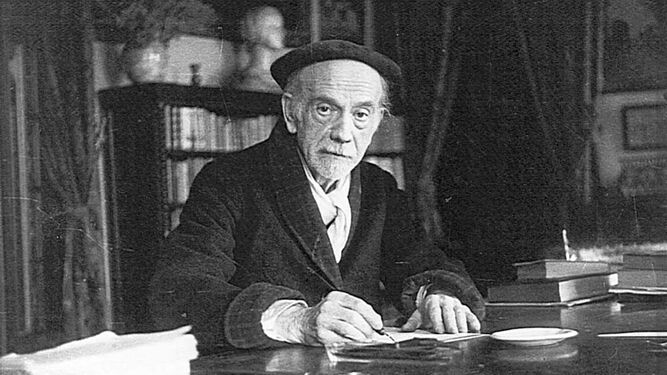 Pío Baroja and Federico García Lorca met up more than once in the literary circles of Madrid. The novelist only made one trip to Granada, on December 12, 1924, with Domingo Barnés and Ortega y Gasset, to give a lecture organized by the Performing Arts Center at the Cervantes Theater entitled The State, the Young, Carnival. The experience was not very good. Baroja did not find the echo he imagined among intellectuals and was also the subject of a joke that ended up ruining the stay. Both Lorca and other intellectuals sent their apologies to Baroja and Ortega.

From Lorca’s writings it is clear that Baroja was an author he had read and admired, even if he did not share his mood. Ortega interested him much more. In fact, the Revista de Occidente published his Odes two years later, and in 1928 the Gypsy Ballads.

During the Civil War, it seems that, without Baroja’s consent, a selection of texts by the author entitled Communists, Jews and Other Scum (1938) was published, which held anti-Semitic, anti-democratic and anti-communist positions. In 1936, frightened by an arrest, he left for France. Through Manuel García Morente, he obtained a safe-conduct and returned in 1937. He continued, however, to come and go to Paris until 1940, the year in which he settled definitively in Spain. During the post-war period he continued to publish his works despite some problems with censorship. During these years, at his home in Madrid, he maintained a tertulia attended by Cela and Benet, among other writers.

He died in 1956 and was buried in the Civil Cemetery in Madrid, as he had declared himself an atheist and anticlerical all his life.