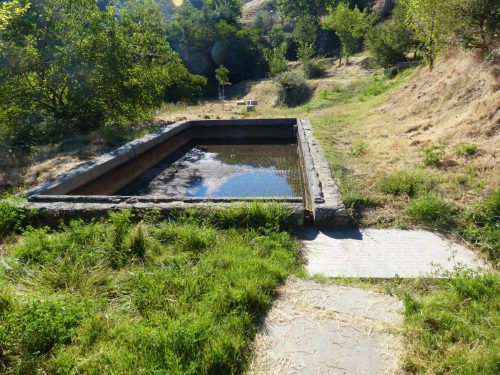 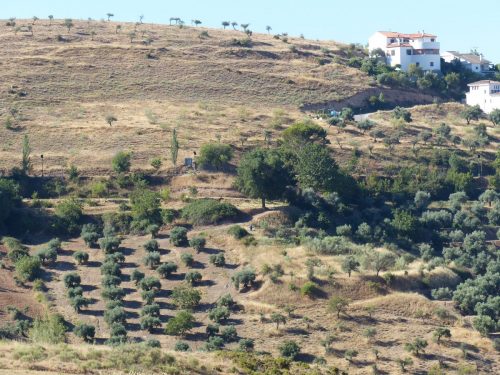 Farm intended for school vacations but in 1936 it became a prison. Lorca spent his last night there. The ruins of the mill are still preserved.

Las Pasaderas de Víznar was, in the years before the Civil War, a picturesque farmhouse with a mill next to the Acequia de Aynadamar (Aynadamar irrigation channel) located at the exit of the village, on the road to Alfacar. In the summer of 1934, the authorities of the Republic turned the farm, also known as Villa Concha, into a summer house for children, in some colonies where boisterous groups of kids stayed who brought joy to that two-storey building with prodigious views adjacent to the road between the two villages. Although it was only used for this purpose for two years, the chronicles on the history of nationalist repression, the history books of the Civil War and the literature manuals baptized it forever as La Colonia (The Colony).

The historic building was demolished in the seventies and only the remains of the stairs and the mill remain. The Regional Government of Andalusia acquired it and declared it a place of Historical Memory, like the rest of the Lorca sites in Víznar and Alfacar. The City Council of Víznar has proposed its rehabilitation on several occasions.

There, on the lower floor, Federico García Lorca spent the final hours of his captivity before being shot in an as yet unclear location between one and two kilometers away.

The rebels evicted the children from La Colonia in early August 1936 and turned the building into a kind of prison where the detainees spent their last hours before being shot. In the early days, the detainees were executed in Puerto Lobo; from mid-August onwards on the road to Alfacar and from September, when the repression fell on the strikers and Republican sympathizers, in the Barranco de Víznar. This last third was the bloodiest.

The first executed in Víznar, according to Molina Fajardo, was a teacher from Huétor Vega who was taken to Puerto Lobo. In the Casilla Meadow, on the way to the Alfaguara sanatorium, 17 unfortunate left-wing sympathizers fell in the first moments. Also riddled with bullets were Agustina González, La Zapatera, Carmela la de los Pajaritos and two other young women who ran a boarding house on Mesones Street.

Lorca, dressed in pajamas, arrived at La Colonia at midnight on August 16, 17 or 18 from Granada in a vehicle in which the other convicts were traveling, guarded by the jailers. According to the different reconstructions, the vehicle arrived at the Cuzco Palace in Víznar, where the fascists had set up their headquarters, and asked for the permission of the head of the sector, Captain José María Nestares, and then continued on its way to La Colonia.

There, on the lower floor, Federico García Lorca spent the final hours of his captivity before being shot at a still unclear location between one and two two kilometers away. The poet arrived in Víznar by car accompanied by the banderilleros Juan Arcoyas Cabezas and Francisco Galadí, and a common criminal nicknamed El Terrible.

In La Colonia already, awaiting their imminent execution, were the teacher of Pulianas Dióscoro Galindo and a boy accused of armed robbery. Ian Gibson and Agustín Penón suggest that during his time there, Lorca asked for a confessor and that, unable to find the priest, one of the guards helped him say a prayer.

The firing squad that killed Lorca and his fellow captives was formed at dawn on August 17, 18 or 19, and was composed, according to researcher Miguel Caballero, of the following nine guards: Ajenjo Moreno, Benavides Benavides, Salvador Baro Leyva, El Salvaorillo; Jimenez Cascales, selected for his reputation as an “accurate marksman”; Fernando Correa Carrasco, Hernandez Martin, Rodriguez Garcia and Hernandez Jimenez. Caballero has exonerates Antonio Ayllón Fernández since he joined the Víznar front on August 26.

Molina Fajardo, on the other hand, maintains that the platoon was made up of the guards who had transferred the condemned from Granada, among them Antonio Ayllón Fernández, Fernando Correa, Benavides (who would later boast of having blown Lorca’s head off with two shots) and another surnamed Villegas who was part of the black squad with El Chato de Plaza Nueva and El Panaerillo. Among the civilians forming part of the platoon was Juan Luis Trescastro, who for months boasted of having given Lorca “two shots in the ass for being a faggot”.

After the shooting, with the first light of day, the executioners returned to La Colonia in search of the prisoners taken in by Nestares under his protection, who were to perform the thankless function of gravediggers.

The Cuzco Palace in Víznar, where the rebels set up their headquarters during the coup of 1936 under the command of Captain José María Nestares Cuéllar, is a building attached to the parish of Víznar where the archbishops of Granada used to spend their summers. The building is in good condition, is privately owned and is open to the public once a year.

At the end of the 18th century, the archbishop of Granada Juan Manuel Moscoso y Peralta, a powerful man born in Peru, related to the Creole nobility and who served as an ensign of Cuzco before taking the habits, added several adjoining lots, expanded the residence and the orchard (with the transfer of two streets by the Municipal Council of Víznar) and had a well built to supply the inhabitants of the mansion.

Juan Manuel Moscoso’s life was very hectic. After studying philosophy in Peru, he married at the age of 24 to a highborn woman. After her death and that of his first-born son, he suffered a severe depression that led to his ordination to the priesthood and, later, to his appointment as bishop in 1771. He later traveled to Spain and specifically to Granada where he resided at least from his appointment as archbishop in 1789 until his death in 1811.

The palace has two floors, with large rooms and a double porticoed gallery. In the upper part of the gallery there are magnificent frescoes by various artists, including Nicolás Martín Tenllado, an artist with a history as curious as that of the archbishop himself. Tenllado was a celibate man who ran a lucrative bric-a-brac business but after his social ascent was tried by the Inquisition and had several lawsuits for the blasphemy and insults to religion that he used to exclaim while performing his works, inside convents and churches.

Among the guardians of La Colonia recorded by Eduardo Molina Fajardo were Mariano Asenjo, a neighbor of Jun with a “cold character”; Antonio Hernández and Antonio Ayllón Fernández; Juan Jiménez Cascales joined the platoon thanks to his reputation as a good marksman; Salvador Baro, Fernando Correa and a certain “athletic, blonde” Benavides who for a time boasted of having fired two shots in Lorca’s head.

There were also occasionally Evaristo Vega, Juan The Painted One, Salvio Rodríguez, Villegas, Moles and Jesús Morenilla. The chaplains of La Colonia were Mariano Vílchez García and Friar Pablo de Ardales, who was recovering from a respiratory problem at La Alfaguara.

The guards were housed on the upper floor of La Colonia. Towards the month of August 1936 a group of prisoners joined the guards to help with the burials.

According to Molina Fajardo, this group was formed by people whose lives Nestares tried to save, unsuccessfully, because the maneuver was discovered and they were all shot. In this group were José Yoldi Bereau, professor of Pharmacy; the councilmen Manuel Salinas (Republican Left) and José Valenzuela Marín (Socialist Party); Joaquín García Labella, professor of Law who during the Republic was civil governor of Seville and director general of Local Administration, and Francisco Rubio Callejón, former civil governor of Jaén.

The residents of La Colonia were also joined by a group of Masons from the lodge of the Hotel Reuma who, after showing their repentance and with the mediation of the Archbishop, became trusted personnel to the point of carrying arms and cartridge cases.

La Colonia functioned autonomously from the rest of the military facilities, had a daily budget of 150 pesetas contributed by the people of Víznar and was guarded by one or two squads of assault guards and volunteers. The sentries, in addition to the mission of guarding, were in charge in the first weeks of the shootings.

The protocol of the shootings, according to Molina Fajardo, was as follows: The civil governor provided the list of those condemned to death to his trusted staff, made up of assault guards and volunteers, who immediately toured the prisons or police stations and handcuffed them for transfer. Once in the car, the condemned were taken to Víznar at night where, after a stay of a few hours in La Colonia, they were shot at dawn.

Dime, Señor,
[Tell me, Lord,]
¡Dios mío!
[my God!]
¿Nos hundes en la sombra
[Do you sink us in the shadow]
del abismo?
[of the abyss?]
¿Somos pájaros ciegos
[Are we blind birds]
sin nidos?
[without nests?]

La luz se va apagando.
[The light is fading.]
¿Y el aceite divino?
[And the divine oil?]
Las olas agonizan.
[The waves are dying.]
¿Has querido
[Have you wanted to]
jugar como si fuéramos
[play as if we were little]
soldaditos?
[soldiers?]
Dime, Señor,
[Tell me, Lord,]
¡Dios mío!
[my God!]
¿No llega el dolor nuestro
[Doesn’t our pain]
a tus oídos?
[reach your ears?]

Public place of free access recognized as a Place of Memory.

HOW TO GET THERE BY BUS