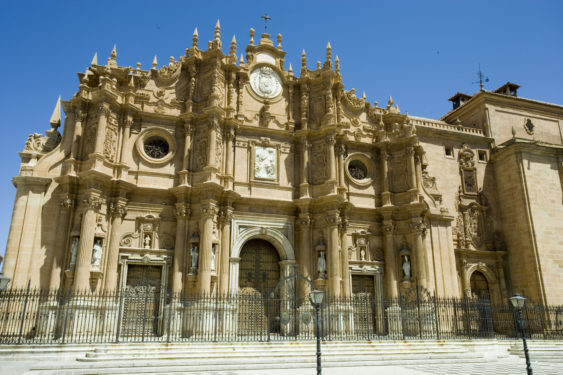 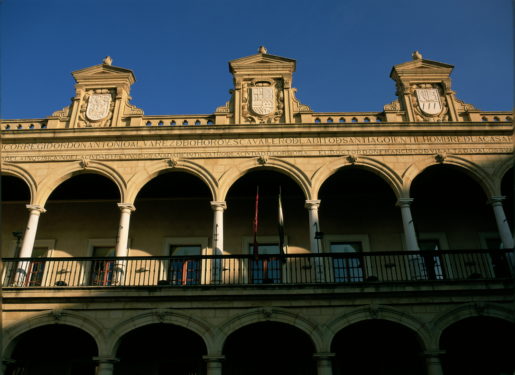 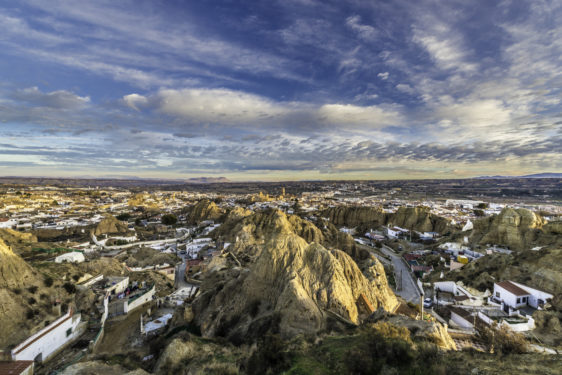 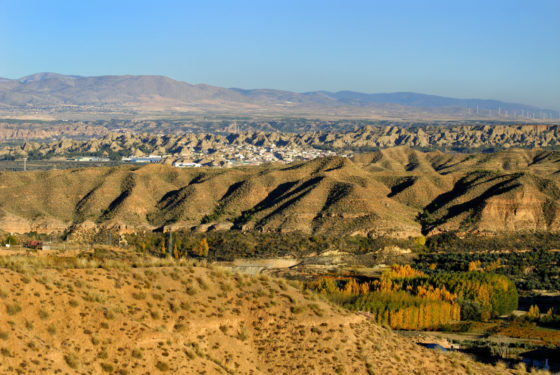 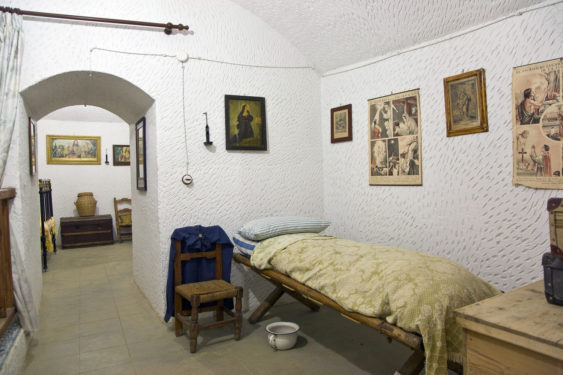 Federico García Lorca accompanied Manuel de Falla to the region of Guadix to inspect an ancient and valuable harpsichord looking for inspiration in the work of Pedro Antonio de Alarcón.

The Granada region of Guadix is part of the itinerary that Federico García Lorca, Manuel de Falla and some of his friends traveled between 1926 and 1928. The interest of the egregious visitors was threefold. On the one hand, the anthropological and historical magnetism that the region projected towards the group of artists and intellectuals; secondly, Manuel Falla’s determination to search for songs and musical themes still alive in popular memory, and, finally, to trace the memory of Pedro Antonio de Alarcón in whom Falla had been inspired to compose the ballet The Three-Cornered Hat (premiered in 1919) and, before that, a first version entitled The Magistrate and the Miller’s Wife.

There were at least two visits, in 1926 and 1928. The first, of only one day’s duration, but of intense memory, was in the month of February, a few weeks after the excursion to the Alpujarra in the New Year of 1926. The illustrious travelers were attracted to all the villages of the region, particularly La Calahorra, Guadix and Purullena. “An unforgettable day,” Federico writes enthusiastically to his brother Francisco a few weeks later.

The second visit, in January 1928, focused on Guadix and Purullena. Falla had been alerted to the poor condition of a valuable harpsichord, one of the first to be built in Spain, which lay abandoned in a basement of the Guadix Cathedral.

“The Renaissance [La Calahorra] castle with the backdrop of the Sierra Nevada is marvelous. Its builder, the Marquis of Zenete, was about to marry Lucrezia Borgia. On the way back we passed through the episcopal and melancholic city of Guadix. Falla was enthusiastic. Passing through the street of Santa Maria de la Cabeza, in the purest Spanish style, we saw, almost intact, the house of the Zagal, a Moorish style. Spain is inexhaustible in spite of the Americans who are taking it away little by little”. A few days later he reiterates his emotion to Melchor Fernández Almagro and sends him a photo of the castle of La Calahorra. “We were in La Calahorra. There I send you that splendid photo of the castle,” he writes.

During the visit, Falla even performed a fragment of a piano version of The Magistrate and the Miller’s Wife, the mimic farce composed ten years earlier (between 1916 and 1917) with script by Gregorio Martínez Sierra based on the novel by Pedro Antonio de Alarcón (Guadix, 1833-Madrid, 1891) The Three-Corenered Hat: “The day after tomorrow we go to the mill of the Magistrate and the Miller’s Wife located in Guadix, where our Falla will play the score on the piano. It will be a fun party,” he writes to the poet Gerardo Diego.

The expedition was led by Federico and Falla together with two of the friends who accompanied them on the visit to the Alpujarra, José Manuel Segura and Antonio Luna. They were joined by the jurist and politician Manuel Torres López and the lawyer and later professor Alfonso García-Valdecasas. The six friends traveled in the García Lorca family’s Fiat.

The first stop was the castle of La Calahorra, a majestic pioneering construction of Spanish military architecture built on top of an earlier Arab one between 1509 and 1512. At an altitude of 1,250 meters, the castle crowns a hill of the former Marquisate of Cenete. Antonio Luna photographed the hikers in the inner courtyard of the fortress.

The second visit, in January 1928, focused on Guadix and Purullena. Falla had been alerted to the poor condition of a valuable harpsichord, one of the first to be built in Spain, which lay abandoned in a basement of Guadix Cathedral.

They then visited the remains of the house of El Zagal, the penultimate king of the Nasrid dynasty of Granada. The last part of the visit, already on the way to Granada, was Purullena and the surroundings of the caves where they returned to pose for Antonio Luna.

According to a journalistic chronicle of the time, Falla had been commissioned by a German publisher to write an article about Spanish harpsichordists. Thus he discovered the existence of the Guadix harpsichord, one of the “first to be made”, which was lying abandoned and seriously damaged in an outbuilding of the Cathedral. The instrument had been made in 1737 in the workshop of Francisco Pérez Mirabel, in Seville. Falla did not hesitate to travel to Guadix and verify the condition of the superb piece. According to the documentation, the instrument cost 200 ducats at the time. Falla described it as a “unique example” and recommended its safekeeping to a dean of the Cathedral of Guadix.

Manuel de Falla’s interest in the harpsichord of Guadix is stemmed on his own work. In 1926, the year of his first visit to the Guadix area, the composer had finished one of his fundamental compositions and his last large-scale work: The concerto for solo harpsichord and a chamber orchestra consisting of five instruments (flute, oboe, clarinet, violin and cello). Despite the short duration of the work, about ten minutes, Falla invested four years in its composition (from 1923 to 1926). It was composed for Wanda Landowska, the work’s dedicatee. Landowka performed as soloist on the day of the premiere in Barcelona on November 5, 1926. In the following months, the Concerto, as it is known, was performed in New York and Boston.

The harpsichord that Falla, García Lorca and the rest of their companions found in the Cathedral of Guadix disappeared during the Civil War according to the version of the current ecclesiastical authorities.

Juan Aparicio, the local journalist who a few years later would become the ideologist of the press during the Franco regime, wrote a peculiar chronicle for The Literary Gazette of the trip through Guadix. It can be said that he was the first writer to recognize the tourist value of the region: “Federico made the last anagnorisis of the Caves District-oh, ah, eh-, including it forever in the tourism circuit recommended to foreign visitors; he even promised, for next summer, a half-month season of troglodyte life, of almost probable paintings, whose cave dwellers-which he believes would excite and will excite Salvador Dalí”. “Federico,” he continues, “gushed forth his precious, his funny, his stupendous assortment of images of pretty metaphors, freshly minted. He juggled them before a harpsichord, pink, gold -rococo- from the 18th century in front of an embossed grille, next to an orange light.” The journalist says that rom Guadix he took “half a dozen bread rolls of wine and a verse for a possible poem: `The departing sun and the children chasing it up the walls”.

The city of Guadix was fully aware of the importance of Manuel de Falla’s visit and his transcendence as a composer. On February 28, 1927, the City Council of Guadix joined the tributes that the maestro from Cadiz received from the cities linked to his life and work. Falla received that day the title of adopted son of Guadix. Two days earlier, the City Council of Granada had given him the same appointment, as recorded on an illuminated parchment made by Hermenegildo Lanz. A year earlier, Seville had recognized him as an adopted son and Cadiz as a favorite son.

A few days ago, the illustrious Maestro Manuel de Falla was in Guadix, accompanied by several personalities from Granada.
The purpose of his trip was to examine a very valuable musical instrument found in the basement of that cathedral.
Maestro Falla had been commissioned by a German company to send notes to compose an article on Spanish harpsichordists.
The instrument found was a harpsichord, one of the first to be built.
It was abandoned in a cellar.
According to the documents found in the archive, the instrument cost 200 ducats and, considering it to be of great value, it was agreed that it would remain in the custody of the dean.
It has the following inscription: Franciscus Pérez Mirabel. Civitates hispalense. Year 1737.
Maestro Falla classifies it as a curious example of harpsichord or spinet[sic], unique in Spain.